The Civilian Climate Corps is a visionary policy that would establish a federal government jobs program and put a new generation of Americans to work while combating the devastating effects of our climate crisis. More specifically, it is a program organized through the Department of the Interior and Agriculture and aims to “conserve and restore public lands and waters, bolster community resilience, increase reforestation, increase carbon sequestration in the agricultural sector, protect biodiversity, improve access to recreation, and address the changing climate.”

In January, the Civilian Climate Corps was established as part of President Biden’s executive orders on climate, but lacked adequate funding to make it a reality. Shortly thereafter in March, Biden asked Congress to provide $10 billion over the course of 10 years to fund the program as part of his nearly $3 trillion American Jobs Infrastructure bill (AJP). Now the AJP is headed to Congress, where programs like the CCC will be negotiated on and ultimately put into a massive infrastructure package that Congress will vote on and Biden will sign into law, likely by August or September.

While there are various Civilian Climate Corps proposals currently gaining traction in Washington D.C., our goal is to ensure that the most ambitious, justice-oriented version of a CCC makes it into the final infrastructure package, and that this package is ultimately signed into law. We urge Representative Porter to support H.R.2760, the Civilian Climate Corps for Jobs and Justice Act and to put it into the infrastructure package as introduced by Rep. Ocasio Cortez. This version of the bill would create 1.5 million good-paying union jobs compared to Biden’s version-- which would only employ 150 thousand people. H.R.2760 would allocate more than 50% of its resources to the most marginalized communities of our country and employ people to alleviate the impacts of climate change and build clean energy infrastructure in their own communities. Beyond these differences, there is one that is irrefutable: HR 2760 would ensure the safety of our planet for generations to come and herald in the era of the Green New Deal our communities desperately need, and the other proposals will not.

Since our formation at the beginning of the year, our OC Hub has organized relentlessly to  advocate for policies that seek to build a fair and just transition for all communities and workers and secure clean air and water, climate and community resiliency, healthy food, access to nature, and a sustainable environment for all people of the United States for generations to come.  At the town hall, Rep Porter stated that she was in support of a CCC. If Rep Porter doesn’t cosponsor the most ambitious version of the CCC, H.R.2670, it would be a betrayal of our generation and jeopardize our future. We are ready to mobilize thousands of young people in our communities to push her to support an ambitious CCC or replace her with someone who will. 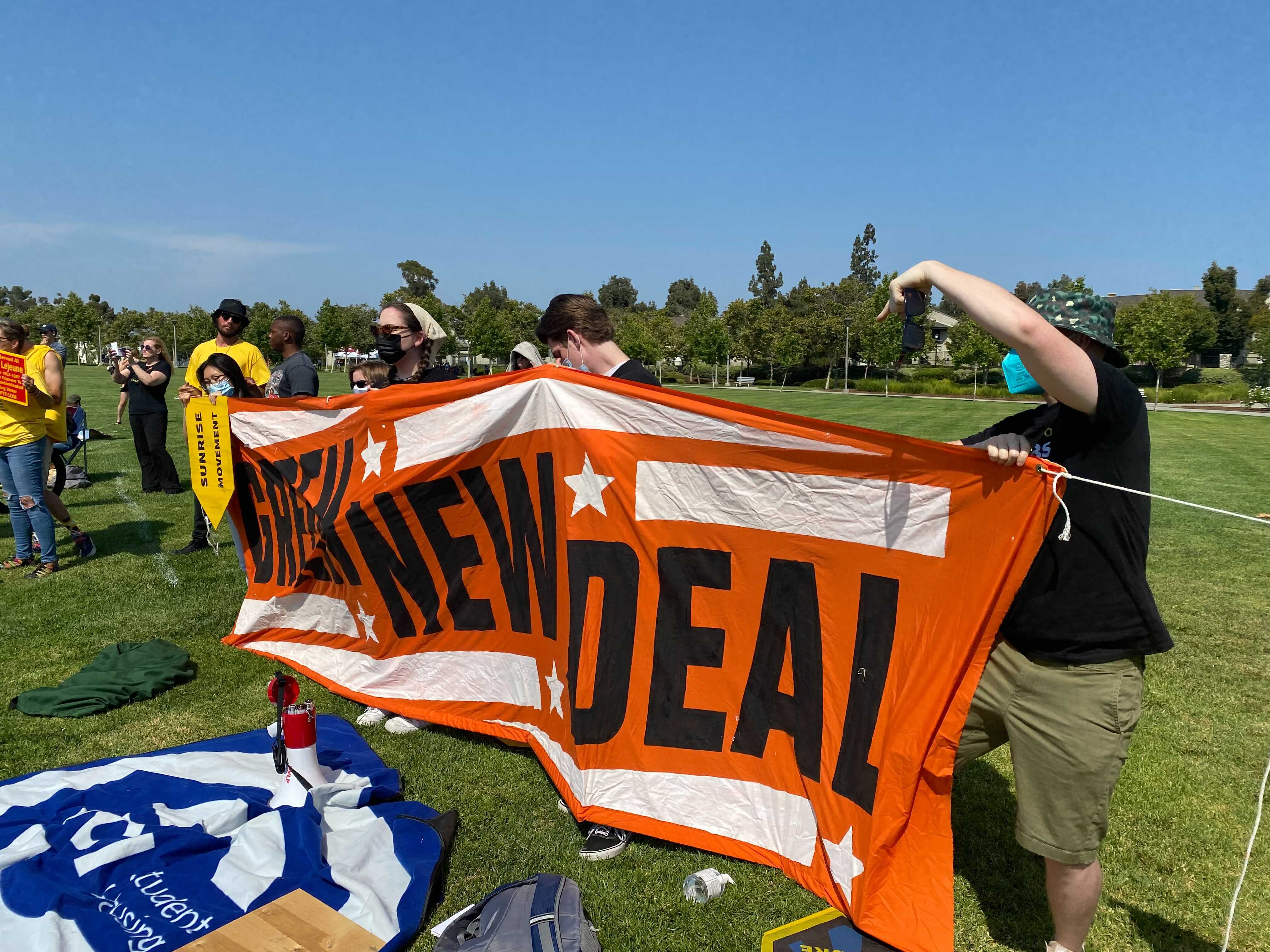 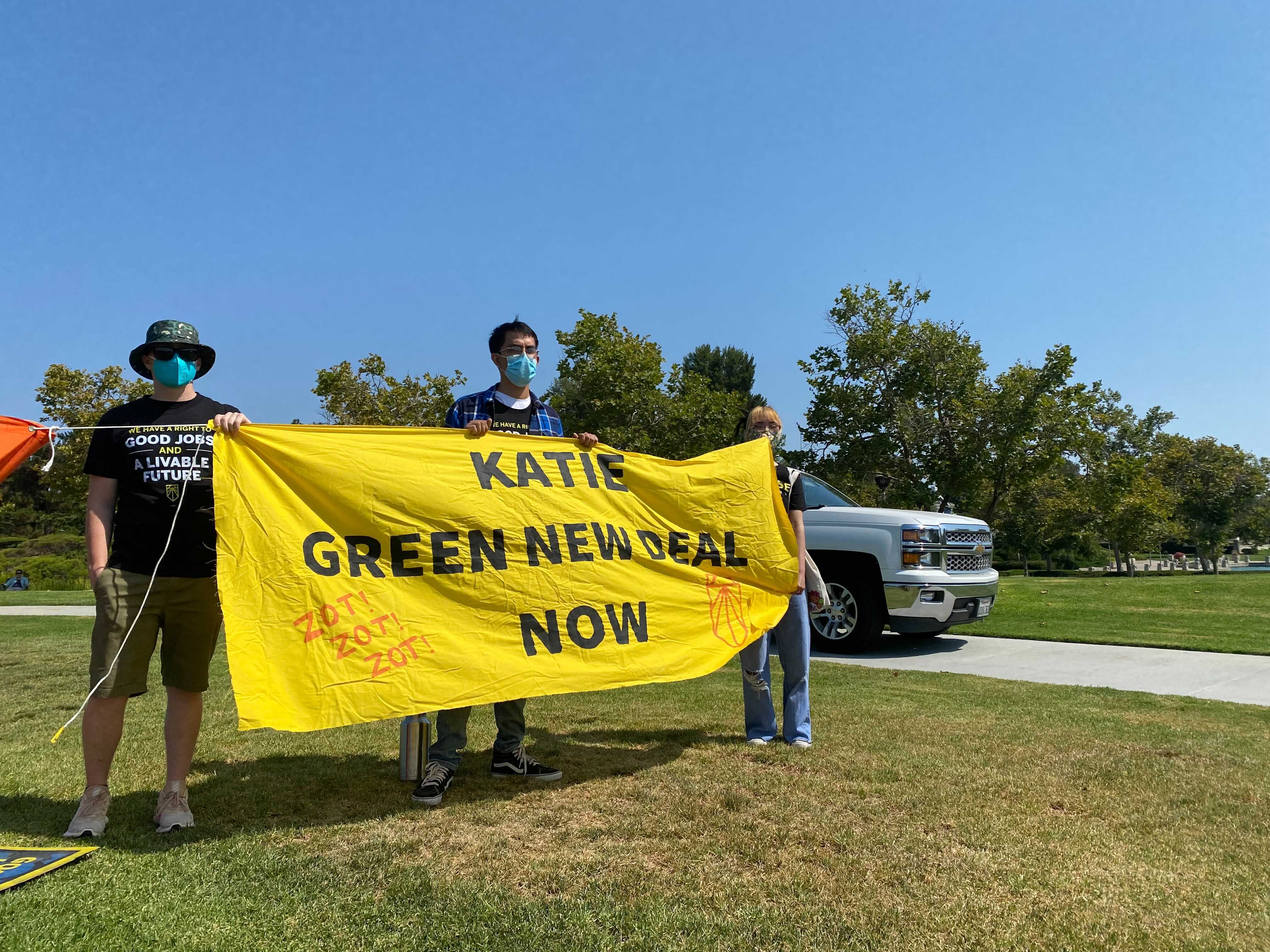 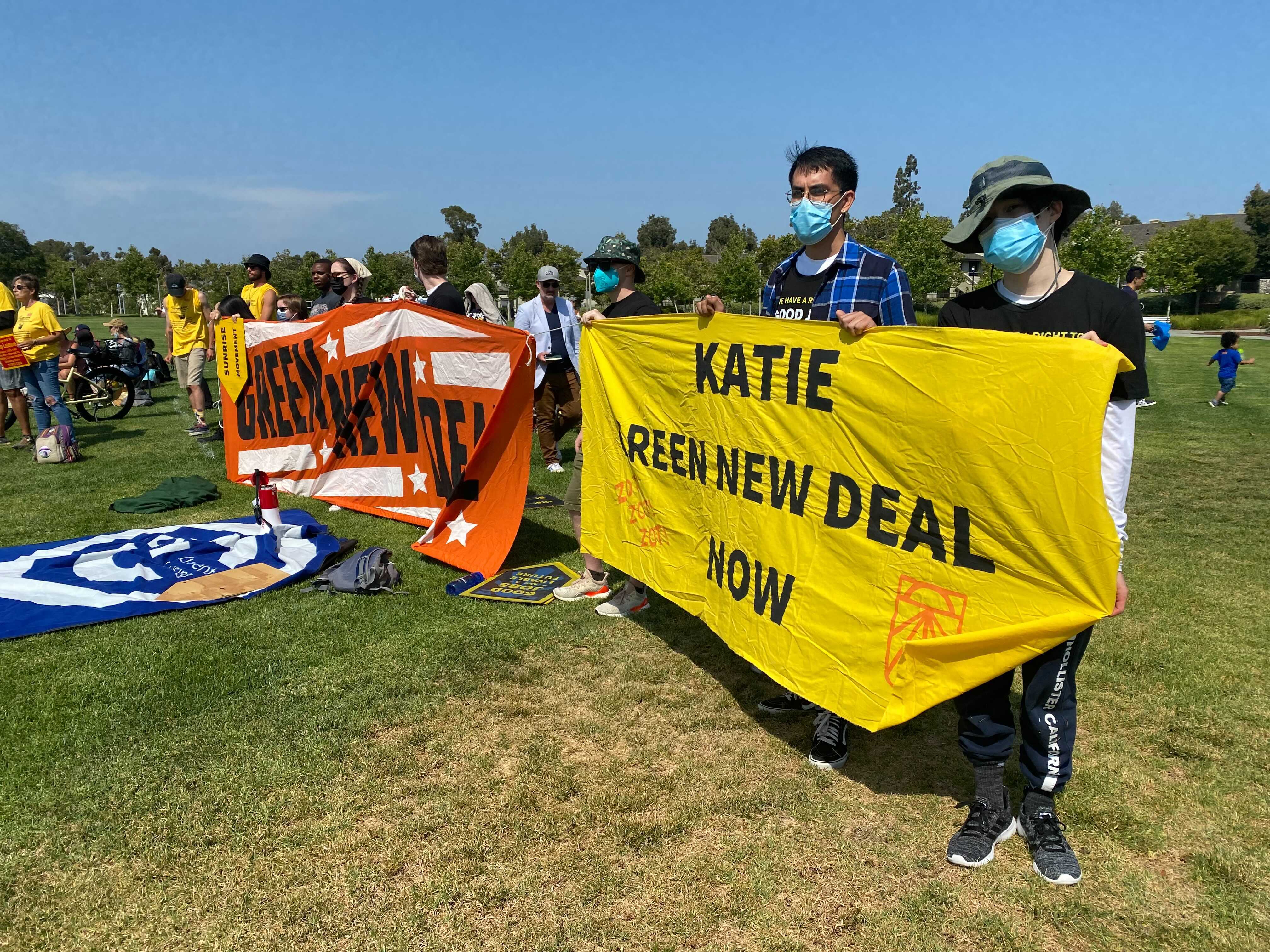 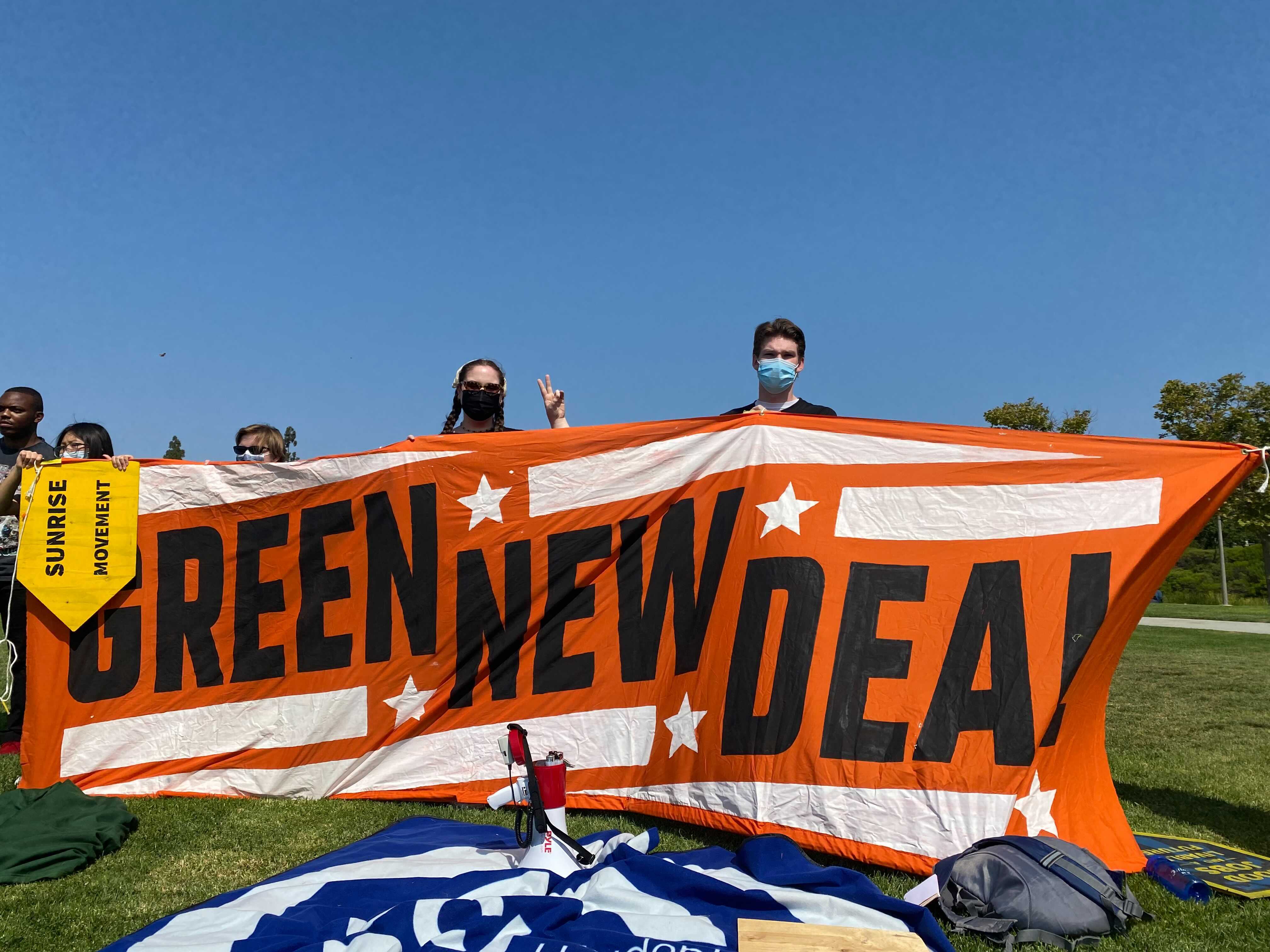 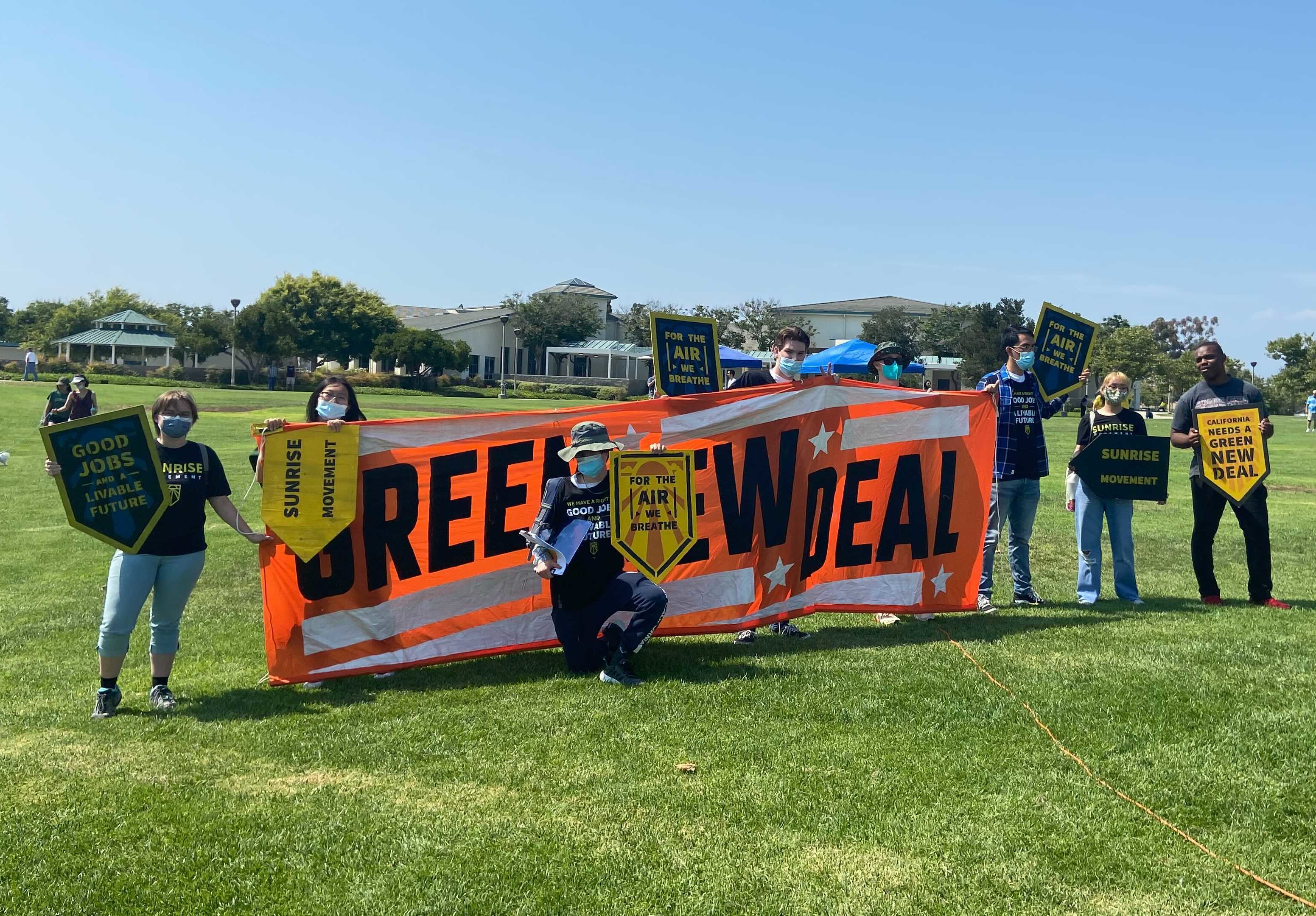 Blog Post
Anaheim and Santa Ana are the cities at the highest risk for climate change, yet Rep. Lou Correa chooses fossil fuel profits over his community. Sunrise OC protested to demand a just transition and good jobs for all.
August 24, 2021
Victories
Our activism worked. We pressured Katie to Support the Green New Deal Resolution. What's next for Sunrise OC?
April 29, 2021